Most people have realized by this point that Windows 8 lacks a traditional start menu.  The reaction to the new start screen has been very mixed, and I find myself of the “what in the world were they thinking?!?!” side.  However, there is hope!

I’ve tried a couple different start menu replacements during the beta of windows 8, but in my opinion, only one lives up to daily use. 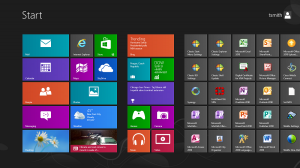 While it is quite attractive, and very easy to get information quickly, it has flaws. For Windows Apps, there isn’t much of a problem, as they run full screen, and reflect this new design – the problems come when you, or applications, take you back to the traditional desktop.  It really is like having two interfaces that you are switching back and forth between.

I found myself at the desktop 99% of the time, using internet explorer, firefox, Office 2012, vSphere client, etc… So, switching to this start screen each time to launch an application was a waste. 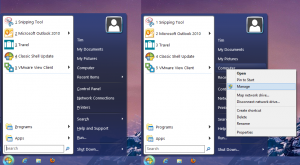 ClassicShell now puts a Start button in place, and allows full right-click capability.  In a recent update, the Apps program list is now added, for easily launching apps from the Start menu as well.

The theme colors will be altered to match your windows color theme.

If you are moving to Windows 8, or have a new machine with it pre-installed, I think ClassicShell is a necessity.