I was invited out to attend the first ever Ravello Blogger Day at Oracle headquarters in San Francisco, California.  The event was arranged by the Tech Reckoning team lead by John Troyer.

To be completely honest, I was apprehensive to attend an Oracle event.  While I have used Ravello for lab and testing work the past couple years, when they were acquired by Oracle I thought the end was near.  Ravello was a great solution to running VMware-based workloads on public cloud infrastructures like AWS or Google Cloud, but no news seemed to come since the acquisition.  Oracle, a massive player in the Database space, is not known for being mover or shaker in the industry, and in fact, is the butt of a lot of licensing jokes.  But, with the recommendation from the Tech Reckoning team, I decided to attend.  And boy am I glad!

First thing in the morning, the schedule showed a 1 hour and 45 minute talk by an Oracle Cloud VP, Clay Magouyrk.  This was the red flag I was expecting.  Death by powerpoint, and slides showing Gartner Quadrant and a lot of marketing……. But it never came.  Quite the opposite happened.  Within the first 5 minutes of talking, Clay had everyone’s attention in the room.

Mr. Magouyrk gave us a little background about what Oracle wanted to do in the cloud space.  While they had an initial cloud offering 10 years ago, a Saas (Software as a Service), it quickly became quite limiting.  Then, the addition of PaaS (Platform as a Service) was next, with the same results, and finally all the way backward down the stack to IaaS (Infrastructure as a Service).   While working backward in this manner is the most cost effective way to get into the cloud business, it’s an architectural nightmare, as you are building from the top down, instead of the bottom up.

Out with the old, and in with the new

Oracle decided it was time for a change, and wanted to develop a Second Generation Cloud.  Assembling a small team from various cloud providers, they set out to build their first new data center, by keeping what people like best about current cloud offering and putting some focus in areas that weren’t yet developed.  The team quickly grew from 5 people to about 1000 people within a 3-year span. 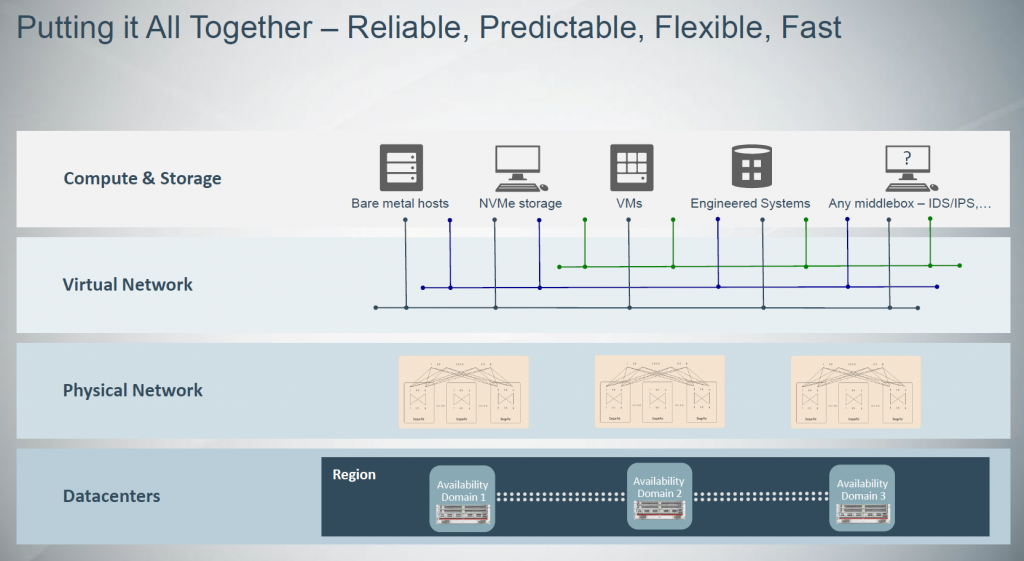 Seattle, Washington, was the first region, with 3 availability domains for redundancy.  Like other cloud offerings, the availability domains are connected via extremely low latency connections. But, something new that Oracle brought to the table was the network design.  Everything is running in private network overlays.  Meaning, (very simplified) they can give customers clean L2 access, that is actually running virtually on top of the physical network.

Bare Metal is also an option here, so customers can run both physical and virtual workloads all within the same data centers, connected by the same L2 links if needed, without limitations.

Later in the day, we were in and out of Ravello – which Oracle will be integrating into the cloud offering with integration hooks that no other vendor can have.  Ravello allows customers to run vSphere based virtual machines directly in the cloud.  By creating blueprints and importing VM images, the workloads can be saved and redeployed within minutes.  However, the new reveal was the network integrations.  Within Ravello we know have visibility into the virtual switches and ports and NICs like never before.  Changes automatically update the blueprint, Visio-like, interface.

The day was long, and there was so much more discussed than I could cover in this post but went quite quick.  At the end of the session, there were many great questions from fellow bloggers and industry experts, and the Oracle / Ravello team was happy to answer and geek-out with us.  The session was so successful, that Oracle is looking to do a Cloud Day again in the future.  I found myself excited about Oracle for the first time, and wanting access to their Cloud!  I’m looking forward to seeing what they have planned for the future, and the deep integrations they will design.   As Clay Magouyrk said, “If it’s not integrated, it’s the wrong thing.”

My mind has been changed.  Ravello is in good hands, and Oracle is positioning itself to be a major player in the cloud market in the future.