With the release of vSphere 5.1, comes a new version of vCloud as well.  I thought this would be a great chance to put up a vCloud lab at home, and to share the steps for others who want to learn the setup and management of vCloud, but don’t have a lot of physical boxes sitting around.

While this process can be done in VMware Workstation, I am going to be using a single physical ESXi 5 server to house the entire lab.

The first thing we need to do is plan out our VMs and resources.  Running vCloud in a lab environment will require a number of VMs, including nested ESXi. (I will not be covering setting up a nested ESXi install, but see how to in my previous article).

So what’s different with this lab, and a production vCloud deployment?  Well, obviously, we would use physical servers for our  vCloud resources, and not nested ESXi installs. Also, we would have another vCenter server.  One vCenter server to hold the cluster that contains the management resources VMs, and another to keep the vCloud resources separate.  For our lab environment, we can combine these, and just separate them into logical datacenters. See the differences below: 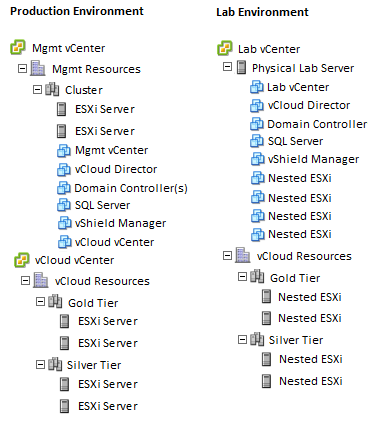 At this point, we are ready to start deploying our VMs to get the environment going.  My order of deployment will be:

Since the first four steps are quite common, I will skip them and start with configuring the nested ESXi servers prior to deploying vCloud, then the installation and configuration of vShield Manager, and finally the installation of vCloud Director in upcoming posts.

How to install Nutanix CE on VMware