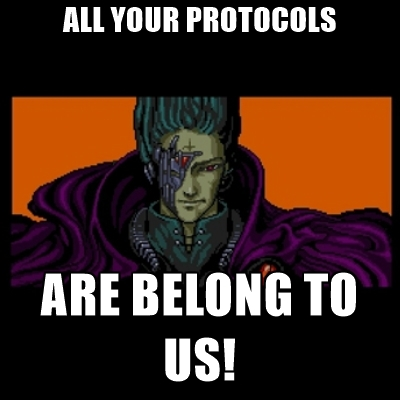 In the storage wars, we typically hear about block vs file, iSCSI vs Fibre Channel, SAN vs NAS, and so on.  The truth is, none of that really matters; at least, not as much as some make it out to. What’s really important, as with most IT decisions, is using solutions that allow the business the ability to consume, transform, and utilize its data as effectively and efficiently as possible.  While there are many different ways to allow the business to do so, I Want to focus on the different storage protocols that allow that data to be accessible.

Let’s take a look a brief look at the block protocols. Block protocols allow remote devices to store data at a block level on storage.

The veteran of the storage industry, fibre channel allows SCSI commands to be sent over fiber optic cable (and now also ethernet) in a very low latency fashion.  With the ability to direct connect in very small deployments, or switching as in most deployments, it’s a very proven technology.  However, don’t let its age fool you, as it’s speed as progressed from 2gb/s, to 4gb/s, to 8gb/s and now 16gb/s.  This speed demon is great for high throughput environments that require the lowest latency.

The swiss army knife of block storage.  iSCSI allows  SCSI commands to be encapsulated in Ethernet frames and transported over your existing network.  While effective over 1gb/s with MPIO ability, the release of 10gb/s networking (and now 40gb/s and 100gb/s) has allowed its presence in the ddata centerskyrocketed over the last years.  While latency is not quite as low as fibre channel, with proper network design it is a very reliable and resilient protocol.

Next up is the file protocols.  File protocols allow remote devices to write to a file, or set of files that exist on a remote filesystem, which in turn handles writing and reading the blocks on the storage.

When thinking about storage arrays and going file over block, most people are talking about NFS.  NFS, or Network File System, is another proven veteran in the field. Developed in 1984 by Sun Microsystems, it is now on version 4. It also has MPIO capability, as well as some granular security capabilities, dependant on the filesystem. NFS, like iSCSI and all file protocols, relies on a proper network implementation to assure its reliability.

SMB, or Server Message Block, is the method used in Microsoft Windows. While some people use CIFS as an alternate term for SMB, CIFS is actually a version of SMB.  The latest version, v3, supports multichannel communications, allowing multiple connections per session. In addition, AES encryption is supported in v3.1.1, which was added with the release of Server 2016.

While known for the protocols of accessing information over the internet, these are in fact file-based protocols, as accessing webpages and binaries is in fact, grabbing and reading files on remote servers.  Hyper Text Transfer Protocol and File Transfer Protocol have been staples in the internet as we know it.  While HTTP is the foundation for the World Wide Web, FTP existed 18 years prior!

Quite of few other protocols exist, some specific to a single file system or object store, such as HDFS, Swift, and more.

At Tech Field Day 12, I got to hear from the Dell EMC Isilon Team.  Isilon a storage device that handles large amounts of data on its scale out file system.  Able to scale to many petabytes, it is found in many datacenters that require large amounts of data to be accessible.  To provide that accessibility, the Isilon support a lot of protocols.  Since it’s a file device, it does not support Fibre Channel and iSCSI.

One of the things that makes the Dell EMC Isilon a capable solution, is that you can use any of these protocols to access the same data.  It is not broken into puddles where certain data is held hostage by 1 protocol.  Servers can connect via any of the above protocols, and all access the same data, while the Isilon handles the locking, security, replication, and protection of that data.

I recommend you try it out.  EMC, now Dell EMC, has done a great job of offering  virtual appliances for some of their solutions.  Try out the Isilon Edge on now.  While it does allow up to 16TB of data, the free version has no support, and has some limited features. You can find it, and some other Dell EMC virtual appliances here:

All travel expenses and incidentals were paid for by Gestalt IT to attend Tech Field Day 12. Additionaly, Dell EMC provided a gift to all delegates but with no expectations about the coverage through this blog or social media.

Time to bring back the middleman

Nothing but ClearSky Ahead